There is a strong tradition of giving gifts for wedding anniversaries that either represent or are made from the anniversary symbol traditionally associated with that year of marriage.  There are two main lists of symbols by year in circulation, the traditional and the modern.  Both anniversary lists have some variations, according to local tradition.

What is a Wedding Anniversary?

On a wedding anniversary in many countries it is traditional to give a gift to your partner (or couples) that symbolise the number of years of marriage.

The names of some wedding anniversaries provide guidance for appropriate or traditional gifts for the spouses to give each other; if there is a party to celebrate the wedding anniversary these gifts can be brought by the guests and/or influence the theme or decoration of the venue.

The Origin of the Symbols

Wedding anniversary symbols, though probably practiced informally even before, truly began in 1897. In that year, Queen Victoria of England celebrated her sixtieth year on the throne. The event was called the "diamond jubilee," and well-wishers celebrated by giving diamonds as gifts, effectively creating the modern diamond market.

Modern anniversary symbols are skewed more for contemporary standards of wealth. As such, a completely new table has been established which is just as valid as the traditional one.

Any man of fashion knows that bags have become a necessary tool and style accessory. No longer seen as solely a woman’s item, men’s bags are masculine, attractive and ideal additions to any contemporary wardrobe. If you would like to dabble in the wide world of men’s bags, but don’t quite know which one would suit your needs best, heed this advice: Stick with a classic type of men's bag, and you can’t go wrong.
The following are six types of men's bags that can be easily mixed and matched with your business and casual wardrobes. 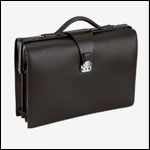 Briefcases are probably the oldest form of “acceptable” handbags for men. Modern-day briefcases, however, have evolved a great deal since the days of your father’s sharp-cornered case. They’re no longer boxy; in fact, that’s about the only traditional element discarded in the modern briefcase. The classic shape (without the sharp corners), buckles, leather exterior, and practical interior compartments help make this bag a timeless addition to any working-man’s wardrobe. 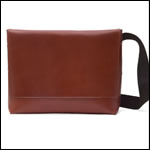 Aptly named, the messenger bag is designed after the bags traditionally carried throughout history by -- whom else? -- messengers. Often made from canvas and swung across the shoulder, messenger bags have taken on a whole new meaning in urban fashion. From students with canvas bags to urban hipsters with modern leather bags, the messenger’s laid-back style will always have a classic casual flair, but today’s leather messenger tote also exudes a hint of uptown sophistication. 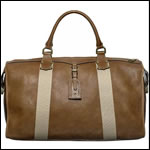 Any traveling man needs a holdall for those weekend jaunts or three-day business trips. Big, bulky luggage has transformed into sleek, stylish holdalls (or carryalls). Its design is inspired by the duffel bag, but its predominantly leather exterior and more refined appearance attribute a classic look to this practical tote. 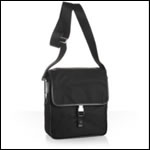 A smaller version of the messenger bag, a camera bag is a longer rectangular bag that is meant to be strapped across the shoulders. Convenient for tourists, but good for any man on the go, a camera bag is a discreet but severely stylish way to lug around your belongings. What makes the camera bag stand out as a classic men's bag is its ability to bring a touch of masculinity to an outfit, even if it is hanging from your shoulder. It’s a simple style with a whole lot of function. 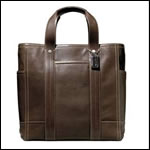 A tote is the modern approach to the classic briefcase. Resembling an artisan’s bag, the tote is the utmost in casual business attire. Its basic design and usual soft leather exterior allots it a classic status, while its long handles give it a contemporary edge. If purchased in a chocolate brown or black, this bag can add a touch of laid-back masculinity to any casual work wear. 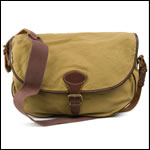 Like the advent of the newsboy cap, the newsboy bag is a classic style that has become synonymous with men’s casual wear. It’s similar to the messenger bag’s style, but its traditional canvas exterior makes it a little less formal than the latter. This bag style is perfect for the student on the go, as it makes a fashion statement and exudes more masculinity and style savvy than a knapsack.